Dominik Dobrowolski, the well-known environmentalist and adventurer, has honoured Denmark EU Council Presidency with the environmental expedition ‘Stop CO2 – Get moving!’
During the expedition, Dominik covered the 1,000-km route from Wrocław to Copenhagen. The most difficult thing to overcome, he says, was the very strong winds and driving rain and snow. Despite the difficult weather conditions, the expedition was a success. The Polish cyclist was honoured by the Prime Minister of Denmark with an invitation to the ceremony in Copenhagen at which the EU Presidency was officially handed over to Denmark on 11th January. At a special meeting with Danish Environment Minister Ida Auken Dominik was given the symbol of the Danish presidency —- a cycle helmet.

The winter trip to Copenhagen was the second in a series of Stop CO2 – Get moving! expeditions. In June, Dominik cycled the route from Wrocław to Brussels to inaugurate the Polish Presidency. Its main aim was to promote sustainable development and energy saving as the best and simplest way to reduce CO2 emissions. Patrons of the expedition included the European Parliament, the Ministry of Foreign Affairs and the Polish Olympic Committee. The expedition was a success and finished with a press conference on Place du Luxembourg in Brussels. Denmarkhas held the Presidency of the Council of the European Union since 1st January. The slogan of the Danish Presidency is: Europe — responsible, dynamic, green and safe!
http://old.cycling-recycling.eu/kopenhaga/ 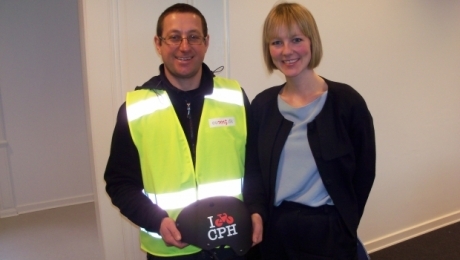